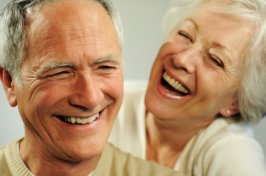 
Tears on His 50th Wedding Anniversary

A man and woman were recently celebrating their 50th wedding anniversary.

While cutting the cake, the wife was moved after seeing her husband’s eyes fill with tears.

The wife took his arm, and looked at him affectionately. “I never knew you were so sentimental.” she whispered.

“Yes,” the wife replied. “I remember it like yesterday.”

“Well,” said the husband, “Today I would have been a free man.”

A couple was celebrating their 50th wedding anniversary.

The man looks at his wife as asks “what would you like to do for our anniversary?”

She then replies “we could run upstairs and make love.”

He replies, “Make up your mind, we can’t do both.”

A man asked his friend about his upcoming 50th wedding anniversary.

The friend asked, “What you did for your 25th anniversary?”

The Man said “I took my wife to Hawaii.”

The friend then asked, “What are you thinking about for your 50th?”

The man replied “I’m thinking about going back to get her!”