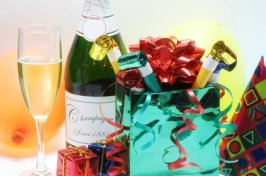 Anniversary party favors aren't something you're actually obliged to give to your guests, but just like with a wedding or any other type of landmark celebration party, a small token of appreciation goes a long way in thanking your friends and family for sharing in your celebration.

Some couples love planning big celebrations for a milestone anniversary like a 25th or 50th, sometimes as early as a 10th anniversary. And depending on how the couple celebrated their wedding, sometimes they'll plan an even larger party for the anniversary. And as such, anniversary wedding favors should definitely be on the list of things to do for the event.

Whether you're looking for anniversary celebration ideas for your own anniversary or you're planning the event for a parent, grandparent or other family member or friend, there are such a wide variety of choices for anniversary favors that you should be able to find something to meet any budget and make every guest happy at the same time.

And with the so many available choices, you absolutely shouldn't have to forgo practicality whether you're planning to buy anniversary party favors or make them by hand.

Here are the top five types of favors that are popular today for anniversary celebrations: