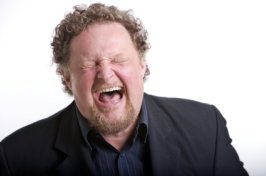 Use these unforgettably funny marriage quotes to enhance your anniversary speech, toast, party or celebration!

""I am" is reportedly the shortest sentence in the English language. Could it be that "I do" is the longest sentence?"
-George Carlin


"After marriage, husband and wife become two sides of a coin; they just can't face each other, but still they stay together."
-Hemant Joshi


"Marriage is not just spiritual communion, it is also remembering to take out the trash."
-Dr. Joyce Brothers


"There's a way of transferring funds that is even faster than electronic banking. It's called marriage."
-Sam Kinison


"The secret of a happy marriage remains a secret."
-Henny Youngman


"You can't put a price tag on love, but you can on all its accessories."
-Melanie Clark


"Getting married for sex is like buying a 747 for the free peanuts."
-Jeff Foxworthy


"Married life teaches one invaluable lesson: to think of things far enough ahead not to say them."
-Jefferson Machamer


"My wife and I were happy for twenty years. Then we met."
-Rodney Dangerfield


"All marriages are happy. It's the living together afterward that causes all the trouble."
-Raymond Hull


"Three rings of marriage are the engagement ring, the wedding ring, and the suffering."
-Unknown


"My husband and I have never considered divorce... murder sometimes, but never divorce."
-Dr. Joyce Brothers