When preparing wedding anniversary speeches you have two choices. You can use a pre-written, fill-in-the-blanks template or you can write your own. We suggest the latter as it is more original, personal and unforgettable.

Keep in mind that a speech and a toast are two different things. A toast is usually brief and may be as simple as a few words followed by an inspirational quote. A speech on the other hand is usually longer in nature and involves a little more pre-party preparation. 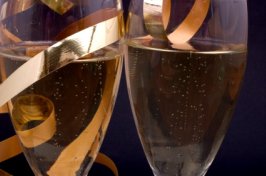 Our tips for writing, preparing and delivering an unforgettable anniversary speech

Be sure to include thanks to everyone who helped plan the party and all the guests who are in attendance.

Keep people’s attention by being short, sweet and to the point in the areas and topics you chose to include when writing.

Include topics and stories that truly define this couple (life highlights, achievements and milestones).

Share a story about the anniversary couple that many guests might not know and find enlightening and entertaining. Don’t be afraid to use humor and jokes …people are here to celebrate and have a good time!

Let them know how inspirational their love story and marriage are to you and others.

Talk about their long loving future together.

End with congratulations and a toast that may include an inspirational quote or poem that is fitting to the celebrating couple.

Be sure to rehearse your speech before the party.